11 Must-Know Bavarian Phrases for the Beer Tents of Oktoberfest

Oktoberfest is the world’s largest beer festival, taking place in the centre of Munich, Germany in late September or early October every year. This year, the Bavarian beer festival starts on 21st September, and is celebrated until the 6th October. To help you out, we’ve tracked down the top words and phrases that every Bavarian should know for Oktoberfest:

If you want to fit in with the locals, DON’T call it Oktoberfest. Instead, you go to the “Wies’n”. This is actually a nickname for the place where Oktoberfest is actually held - Theresienwiese in central Munich.

The informal Bavarian greeting, alongside the more formal “Grüß Gott” (groos got), is the only way you should greet your fellow revellers before embarking on your day of Oktoberfest festivities.

The only way to dress at Oktoberfest is in full “Tracht”, or traditional clothing. A Dirndl is a peasant style pinafore dress for women with an undershirt and apron, while Lederhosen are leather trousers or shorts for men. However, if you wear a dirndl with an apron, you have to make sure to tie the bow on the correct side. The left side means that you are single and ready to mingle. Tying it on the right, means that you are taken. This will avoid you any awkward moments in the beer tent!

The Bavarian drinking cry basically translates as “one, two, three, drink!” And make sure you also use…

Though this might look the same as the “cheers” used by Northern Germans when they toast, you’ll have to soften your consonants and roll your rrs to make the Bavarian equivalent sound correct.

Though you probably won’t need to say this yourself, this is a very important phrase at Oktoberfest if only because no beer can be drunk before it is announced! It falls upon the Mayor of Munich to open Oktoberfest by tapping a beer keg and shouting “O’ZAPFT IS’!”, thus officially starting the festivities. It literally means “It’s tapped!” 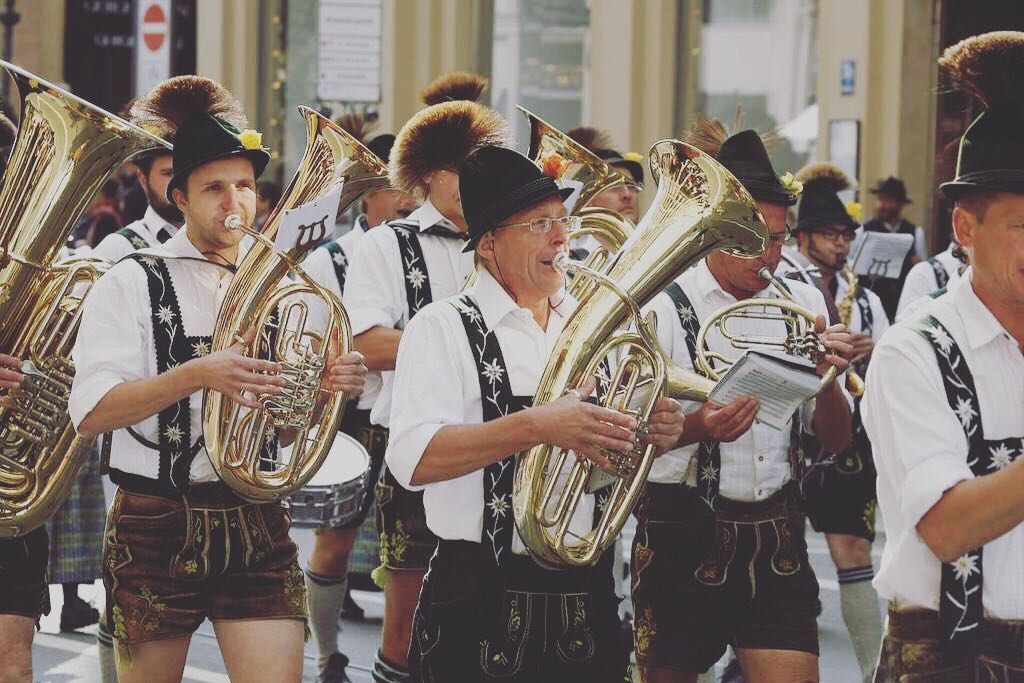 The Bavarian word that refers to a one-litre glass mug of beer. Make sure you order a Maß if you want to drink like a true Bavarian - ordering a normal beer just won’t cut it at Oktoberfest! A Maß is always made of clear glass at Oktoberfest, so you can be sure you are getting your money’s worth. It is also important to refer to the actual beer itself as Oktoberfestbier. Only 6 breweries, all within Munich’s city walls, are allowed to serve at Oktoberfest, so they are very firm that it is no ordinary beer! (And before you ask… it’s pretty hard to sneak away with an Oktoberfest Maß… 226,000 people tried and failed last year.)

The Bavarian words for boys (Buam) and girls (Madln) will come in particularly useful when you are trying to work out which is the right toilet after a few beers at the Wies’n.

While not technically a Bavarian word as it can be used in high German as well, this is the affectionate name given to those who have overdone it on the Oktoberfestbier by locals. It literally translates to “beer corpses”. Or, to use a more Bavarian phrase, they are simply “Ogschdocha”, or drunk.

Bread rolls are such an important part of German life that they have a different name depending on where in the country you are! “Semml” or “Semme” is the word that is used in Bavaria - but you are more likely to come across “Brez’n”, or pretzels, at Oktoberfest.

Make sure you sign off with this classic Bavarian goodbye. It’s a shortened version of “May God protect you”, which you will surely be hoping for after one too many glugs from the Maß.

Now that you have the Octoberfest lingo down, it’s time to put your Bavarian into practice in preparation for Octoberfest 2019!

The Tandem app is the best way to gain fluency in any language. With millions of members, Tandem is the largest global language learning community out there! Tandem lets you connect with native Bavarian speakers all over the world, so you can practice speaking Bavarian via text, voice notes, and video calling. Immerse yourself in the Bavarian language and culture, and speak your way to fluency, for free!

More of a traveler? Connect with Munich locals ahead of your trip by using the “search by city” Pro feature, or the “near me” Pro feature for when you are already there! Still getting your head around the German language? Use our in-app translation feature to help you compose a message or translate an incoming one. Correct your Tandem partner's message or add a comment to help them learn and progress. Still not sure about Bavarian pronunciation? Simply tap on the message you want to hear and choose the “speak” option. Einfach!

Download the Tandem app and you’ll be drinking beer and eating pretzels like a true Bavarian in no time!