This revolutionary article (yes it honestly lives up to this title) comes to you from Gabriel Wyner, national bestselling author of Fluent Forever: How to learn any language fast and never forget it and founder of the Fluent Forever app. He will be discussing what science says about learning a language and makes an argument in favor of the fairly un-sexy language learning tool: flashcards! This one will leave you questioning everything!

You’ve decided to learn a language, you go online to figure out what to do next, and…disaster. A quick Google search floods your screen with hundreds of learning methods. Every one of them claims to be better than the other. You see products of every size, shape and price point — customized notebooks, apps, tutors, virtual classrooms, real classrooms, virtual reality classrooms…it’s enough to paralyze even the most determined of us.

How can you verify what anyone is saying, when there doesn’t seem to be a central, unbiased source of reviews or truth?

My name is Gabe Wyner, and back in 2010, I was dealing with this exact problem. And what I found was that there is a solution to getting through the noise, and it’s counterintuitive: instead of zooming into all of the different language learning methods, you zoom out, and look at the science and research behind learning in general. There, you can discover that there actually is some clarity to be found.

Not to offer too many spoilers, but by the end of this article, I’m going to make an argument in favor of a fairly un-sexy language learning tool: flashcards. But along the way, I’m going to give you the science behind my arguments. I’m doing this because I want you to have the tools to make your own conclusions. That way, regardless of what approach you end up using, you have a better ability to assess what will work best for you.

Let me show you around the research in three steps:

Language learning is a memory game. There’s thousands upon thousands of words and grammar rules that you want to get inside of your brain. Ideally, you’d also like them to stay there, instead of just vanishing after a few weeks.

When we memorize information, our instincts are to repeat that information a bunch of times until it sticks. It’s a strategy that serves us well in the short term. Suppose you and a friend are both learning that kutya is the Hungarian word for dog. Your friend repeats the two words enough to just barely memorize that word, whereas you keep going and study twice as long as your friend. In the short term, you win: spending twice as much time will almost double your recall rate a week from now. But in the long term, something terrible happens: 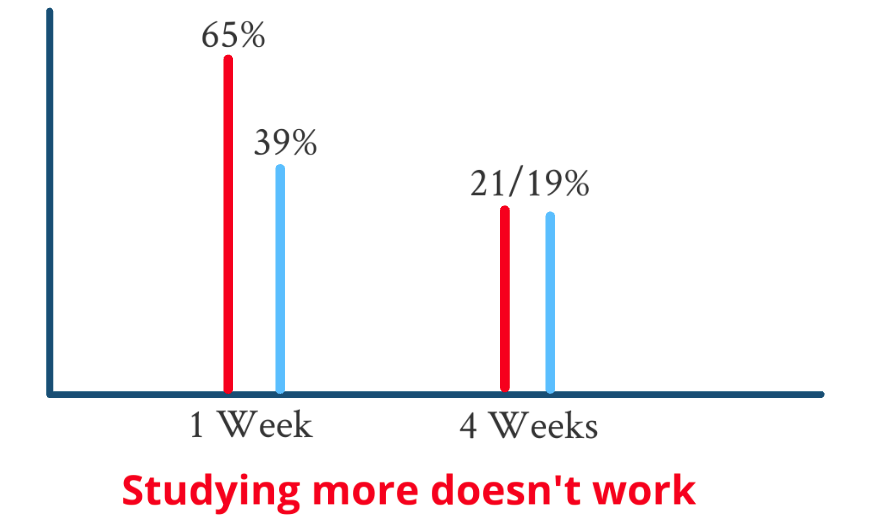 After just four weeks, you’ve lost any advantage you had over your friend. All that extra repetition is known as “over-learning,” and it doesn’t help long term memory at all. Can you remember a single fact from the last school test you crammed, for example? Can you even remember the test itself? If you’re going to invest your time into a language, you want to remember it for at least months, or if not years or decades to come.

Whatever approach you take for learning your target language, working harder is not what’s going to benefit you. Might I suggest that you do it by working as little as possible?

If you follow my advice from Step 1 and study the bare minimum, you’ll find that your recall rate is fairly poor. Sure, it’s about the same as you’d get if you studied much more, but you’re going to need some additional help if you want to reach any degree of fluency.

Suppose I gave you a list of words to learn, you spent 5 minutes to barely learn them, and then I gave you a choice:

Later on, we do a graded test. Here are the recall rates you can expect to see: 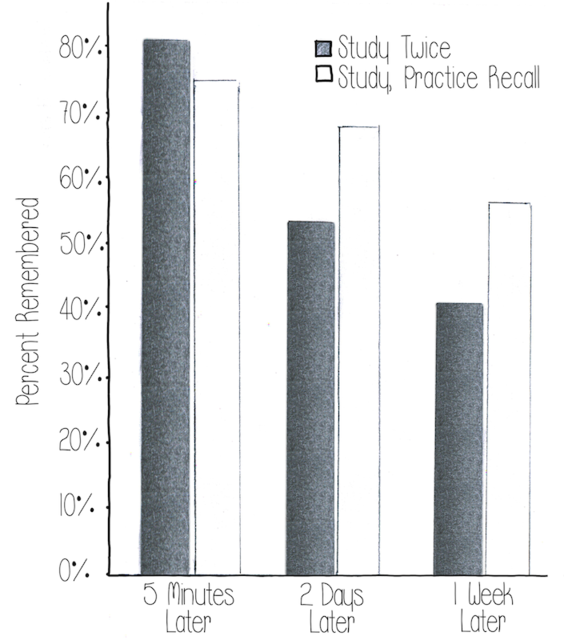 Notice how studying twice (i.e., over-learning) helps for a few minutes, and then screws you in the long run. In contrast, that blank sheet of paper will help you much more than additional study time. You’ll remember 35% more in a week. Ultimately, studies show a 5:1 benefit for testing over studying, meaning that 5 minutes of testing yourself is worth 25 minutes of studying.

Let’s try a new challenge: I give you a list of words to memorize. You memorize those words for 5 minutes, and you now have 3 choices:

C. Grab THREE blank sheets of paper. Write down what you can on the first one, hand it back, and then do it again with the second one, and then the third.

We know that A is the wrong choice, but is there really going to be a significant difference between B and C? Surely filling out the first blank sheet of paper is where the benefits are…that second and third sheet is just a waste of time…isn’t it?

Here are your recall results, one week later: 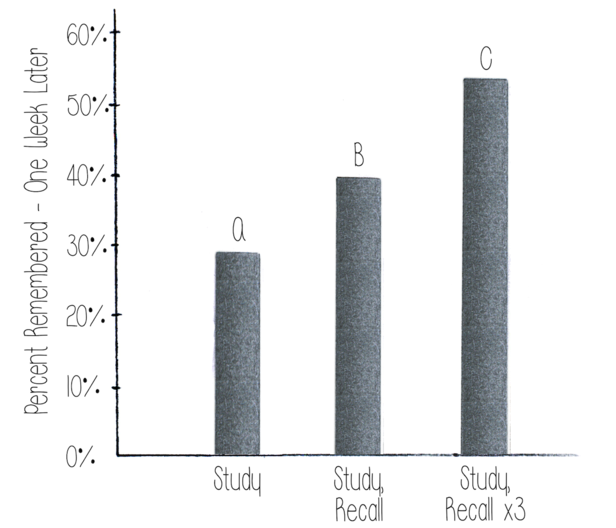 On the surface, this seems ridiculous. How could three identical tests be that much more effective than a single test? Here’s the logic to it:

When you study by reading through a list multiple times, you’re practicing reading, not recall. If you want to get better at recalling something, you should practice recalling it. Our blank sheet of paper, which could be replaced by a stack of flashcards, a multiple choice test, or simply trying to remember it in your head, is precisely the type of practice required in order to retain the huge volume of data that is needed to learn a foreign language.

If you follow the advice in Steps 1 and 2, then you’re going to spend the least time possible repeating new concepts, and as much time as possible testing yourself to see what you can remember. And this is going to serve you really, really well.

So the next thing I’d like to look at is whether there’s a way to improve the effectiveness of each of your tests. And at the same time, it’d be nice to make those tests more fun, so that they’re not draining your motivation. As it turns out, we can accomplish both at the same time!

Suppose I asked you what the Hungarian word for “dog” was. I’d mentioned this word back in Step 1, so you have been exposed to it. Take a moment to see if you can recall it, and then, keep reading.

There are about 6 things your brain might have done in response to my question:

4) You remembered that it was a word that started with a K, or maybe a word ending in “ya.” It sat right at the tip of your tongue for a while, and then eventually you remembered it. Kutya!

5) You totally forgot, but when I mentioned kutya, you thought “Oh yeah! That rings a bell!”

6) You TOTALLY forgot. Even after I mentioned that it was kutya, you looked at that word and thought “Wow, I’ve never seen that word before…I must have completely skipped over it!”

Of these six options, what’s the best one?

And the answer, oddly enough, is #4. The worst possible outcome is #1.

Our default belief is that knowing something really well is a good thing. But as it turns out, that’s not true at all when it comes to effective recall practice. If you can remember a word really well (Option #1), then testing you on that word is HALF as impactful as testing you on a word that sits right on the tip of your tongue before it jumps into your memory. As it turns out, the most effective moment to test yourself on something is the moment right before you forget it. That’s also the moment when a test is the most rewarding - it’s challenging in just the right way to be really satisfying when you remember the answer.

How do we combine the three steps? We want to study as little as possible (step 1: Maximize Laziness), practice recall as much as possible (step 2: Don’t Review. Recall), and we want our recall practice to be challenging, but not too hard (step 3: Wait, Wait! Don’t Tell Me!).

What if you could have short study periods for every new word or concept in your new language, and then be able to somehow monitor when you’re just about to forget it so you can test yourself at the optimum time?

Well, this solution actually exists - in the form of computer-controlled flashcards. The study period is just the moment when you prepare a new flashcard, i.e., the moment you pick a concept to learn and write it down is the moment of learning. Then you stick that flashcard into a program (known as ‘Spaced Repetition Systems’), and the program figures out how to test you right before you forget. After that, you just rinse and repeat for every concept you want to remember.

I like to recommend flashcards not because they’re sexy or exciting – they’re not, and they likely have associations to the most boring days of school – but if you know how to use them effectively, they end up being the closest thing we have to uploading data directly into our brain. And that is pretty exciting.

In terms of the flashcard systems I find effective, I tend to recommend Anki because it gives you the flexibility to learn using images instead of translations, and it’s free. If you’d like some info on how to do that, you can jump into some tutorials over here. Alternatively, I’ve been working on an app that automates this process, which you can check out over here.

And that’s all! I wish you the best of luck in your language journey, and I hope that this article gave you some new tools to play with!

Gabriel Wyner is the national bestselling author of Fluent Forever: How to learn any language fast and never forget it. His language learning app became the most successful crowdfunded app in history, raising $1.7M in 2017-2018. In terms of his background, he was an opera singer who reached fluency in German in 14 weeks with the help of the immersive Middlebury Language Schools. That experience led him to fall in love with the process of language learning, going on to spend two months in intensive Italian courses in Perugia, Italy. Searching for ways to bring the immersion experience into the home, he began to develop a system that rapidly builds fluency in short, daily sessions. In 2010, his efforts paid off. He learned French to fluency in 5 months, and then Russian in 10 months, eventually moving on to learning Hungarian, Japanese and Spanish, writing his book, and founding his company. 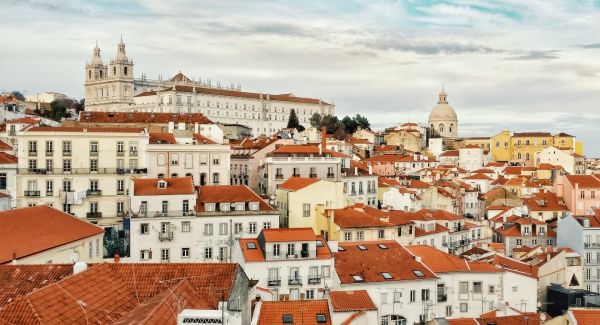 With the US presidential elections coming up on November 3rd, we thought it would be fitting to take a look back at President Donald Trump’s typos on Twitter!
3-min read

How To Write an Email in English

Emails are among the most commonly used means of communication in the world. Continue reading for how to write a perfect email in English!
4-min read