Ever since the theme of this year’s Eurovision was revealed earlier this year— “Dare To Dream”— we could hardly contain our excitement for the Eurovision Song Contest 2019! With the grand final on the 18th May approaching ever so quickly, we decided to put together some fun facts about the Eurovision and some of the craziest performances on the Eurovision stage to get you in the Eurovision spirit.

The Eurovision is an international song contest, broadcasted by the European Broadcasting Union, that showcases multicultural talent. 41 countries will be participating in Expo Tel Aviv at Eurovision 2019. The Eurovision has been running since 1956, making it the longest-running international television contest and the world’s biggest live music event with 186 million viewers internationally last year. 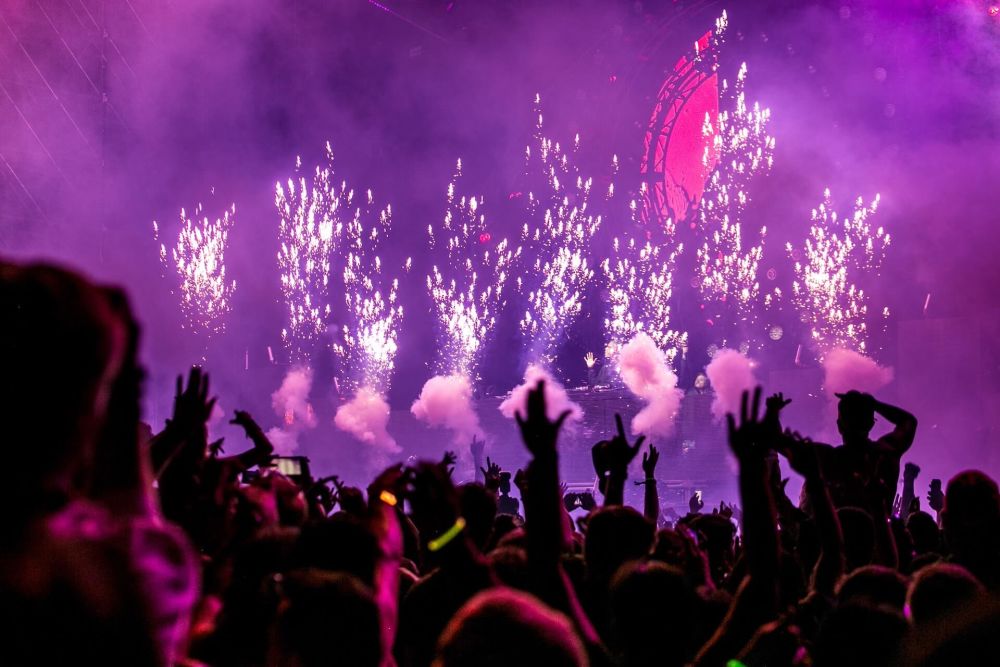 Fun facts about the Eurovision:

Would the Eurovision be Eurovision without some outrageous, cringe-worthy and memorable performances? Take a trip down memory lane and reminisce with us about some weird songs and performances that shocked us!

Being the only hard rock / heavy metal band to have won the contest, how can we forget these terrifying creatures? If it wasn’t the monster masks and horror elements, it was definitely the insane whiplash we experienced that kept us up at night. 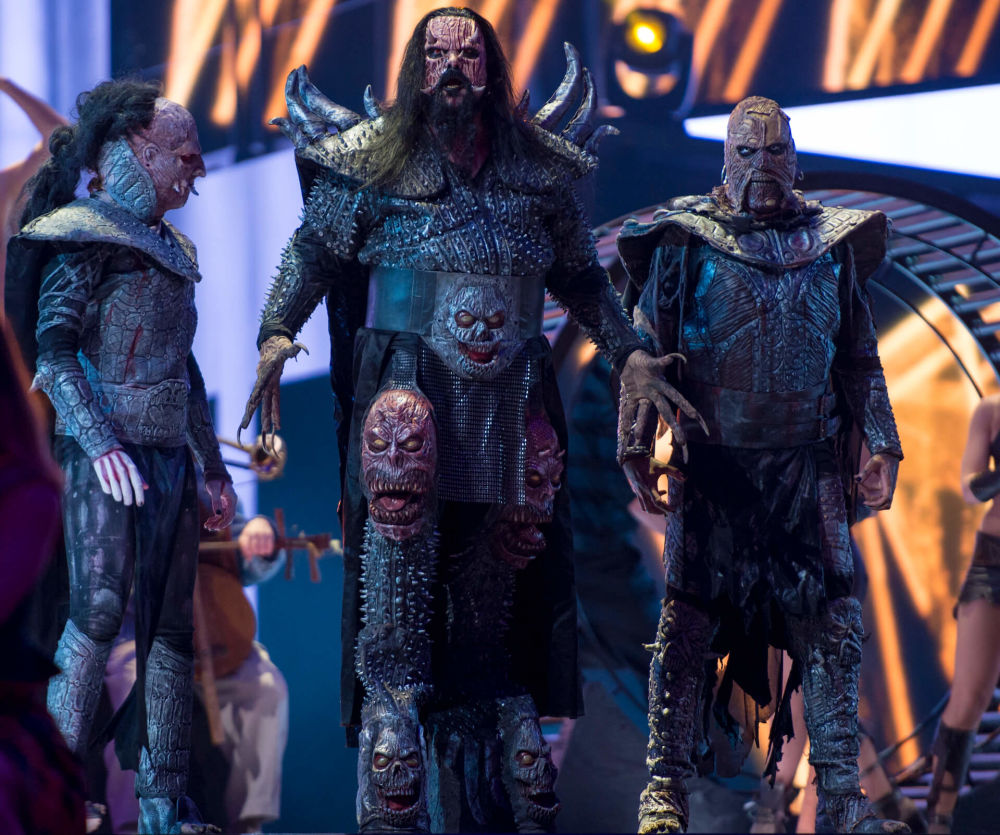 I don’t think this catchy tune or the aluminium outfits has ever left our minds. It was as if the Tin Man lost his way from the Yellow Brick Road and stumbled into an eccentric nightclub with his tin man friends. Our personal favorite.

I feel like we don’t need reminding of this cringe-worthy performance but we just had to mention it! Though Ireland remains the most successful Eurovision nation with a record seven wins, for good reason, Dustin didn’t make it past the semi-finals in 2008. 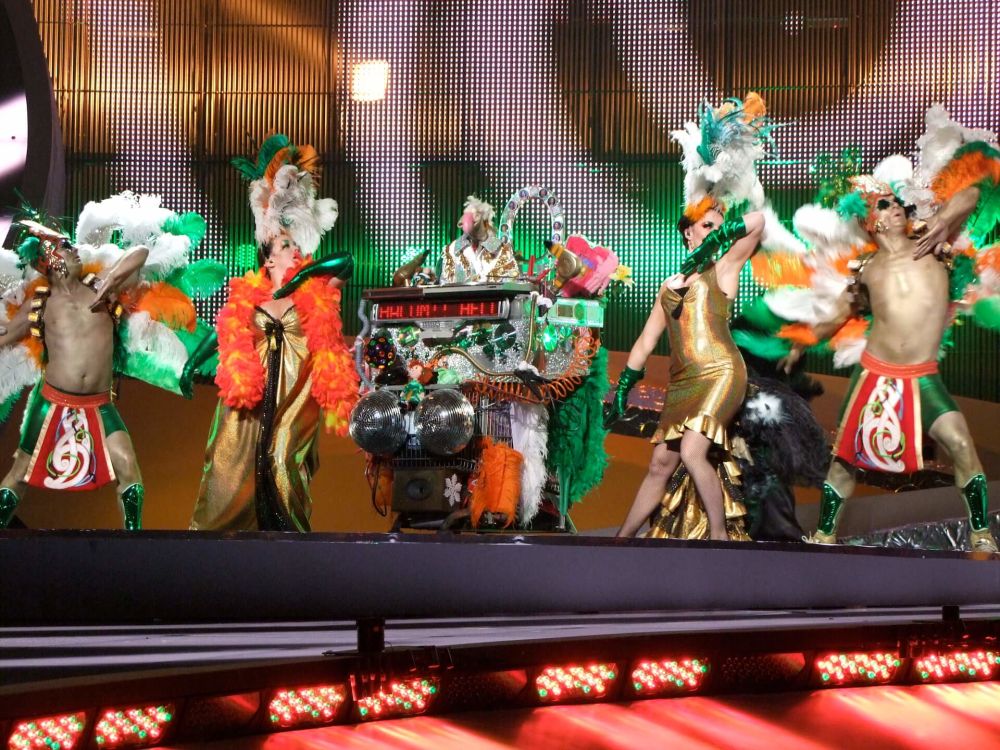 Though the vocals were pretty standard for the Eurovision, it was the seriously catchy sax instrumental that made this tune stay in our heads for such a long time. I think we all tried to mimic his dance moves while pretending to play the sax. That fiddle player must have suffered some serious dizziness after the performance too!

Ahh, The Grannies from Buranovo. We all know and love babushkas in one way or another. The performance starts with the grannies baking cookies and singing a sweet song (as grandmothers do), and then the beat drops! They disperse from the kitchen and begin syncopated bopping, swaying and elaborate arm movements. Inspiring enough to learn some Russian? I think we all want to party with these grannies! 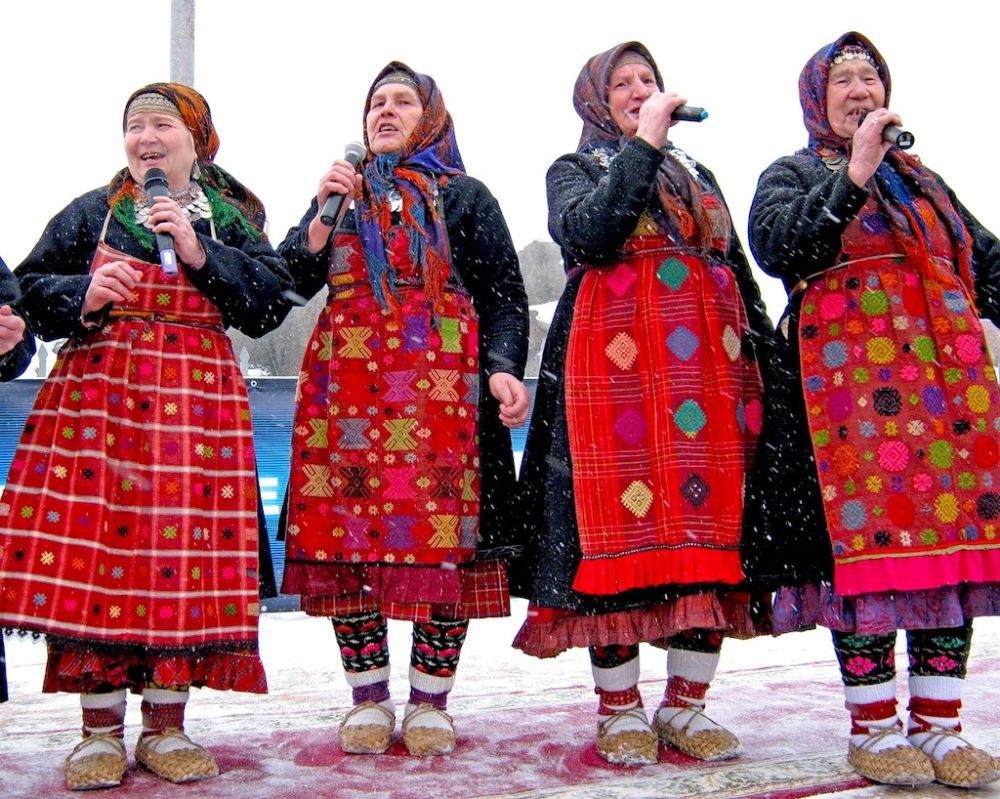 Though mostly naked backup dancers and Eurovision pyrotechnics are a standard, this opera-esque banger definitely took us all by surprise! If it wasn’t the mood change of the song, it was definitely the sudden levitation. 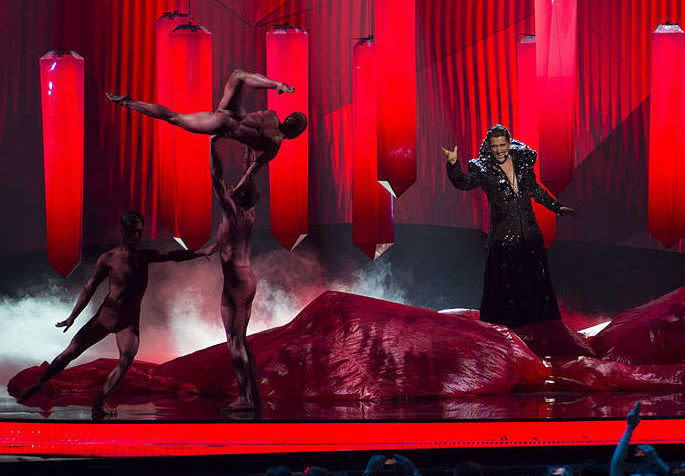 We hope this year’s performances are just as memorable as those we have just mentioned. With the Netherlands tipped to win the 2019 Eurovision Song Contest, we are finding it difficult to pick our favorite, however, we do have some opinions on the entrants for the 2019 song contest in Tel Aviv.

We are intrigued by Iceland’s song “Hatrið mun sigra" and anxiously anticipating the no doubt jaw-dropping performance. We are thinking a shock-fest similar to Lordi 2006, with lots of horror, chains, and leather elements.

Spain’s song "La Venda" is getting us into the mood to shake our hips and party on a beach at sunset. All we need are some cocktails and trumpet players!

San Marino’s "Say Na Na Na" can’t help but give us a “Gunther” vibe, which if you don’t know what we are talking about, just google “Gunther- Ding Dong Song” (you’re welcome). Although, with the disco beat, we can’t help but throw some shakes on the dancefloor.

The very pop-y Azerbaijan song "Truth" is one that belongs in the charts. This song definitely doesn’t have the traditional Eurovision sound to it, which we are loving, although this one has sadly just missed out on being in our top four.

Speaking of the charts, Estonia’s "Storm" is also giving us Avicii and David Guetta sounds, which we can’t help but love.

We have a soft spot for Albania’s "Ktheju Tokës," with an alternative sound to the very current (and honestly very done) pop music. We love how it is giving us eastern sounds which is right back to its roots.

Australia’s entry with their song "Zero Gravity" can’t help but give us some serious Romania 2013 vibes, with the opera sound and some serious elevation. How do they get up so high?

We think we are all anticipating the host country’s song. Israel’s entry "Home" is very different from their Eurovision 2018 song “Toy” with an emotional and powerful ballad. Does anyone else think of Freddie Mercury when you see this music video? Just me, ok.

We have to mention Portugal’s song "Telemóveis" which gives us serious Bollywood crossed with Edward Scissorhands wearing Nike vibes 🤔. Definitely, one to watch this year!

However, though we love all the entries mentioned above, our top favorites are:

Greece with "Better Love"— that voice though! This tune can’t help but inspire us and make us cry at the same time. We are just hoping the performance is just as beautiful as the music video.

Italy really got it right this year with "Soldi.” This is the ultimate catchy tune and we love how they kept the lyrics in Italian!

Malta’s "Chameleon" is a trendy and current vibe whilst also giving a fresh sound. We just can’t wait to see how they will perform this!

With Switzerland tipped to come in third with the song "She Got Me," we think this song could go on to win! Though this tune is very current and pop-y we can’t help but love the Jason Derulo vibe with the Arabian / middle eastern-esque beat.

When we hear the word Eurovision it is usually closely followed by the word party. The annual Eurovision party is a time to come together, get the drinking games going and appreciate the diverse talents of our neighboring countries (and Australia). The bunting and flags are out in all their glory, both as decoration and outfits, and the arguments about who has control over the television remote can get very heated! Your friends seemingly divide into two distinct groups: those who love the Eurovision Song Contest and those who find it to be an absolute cringe-fest (maybe losing that remote was not so accidental after all). However, despite the chaos, a Eurovision watched alone is never as much fun! 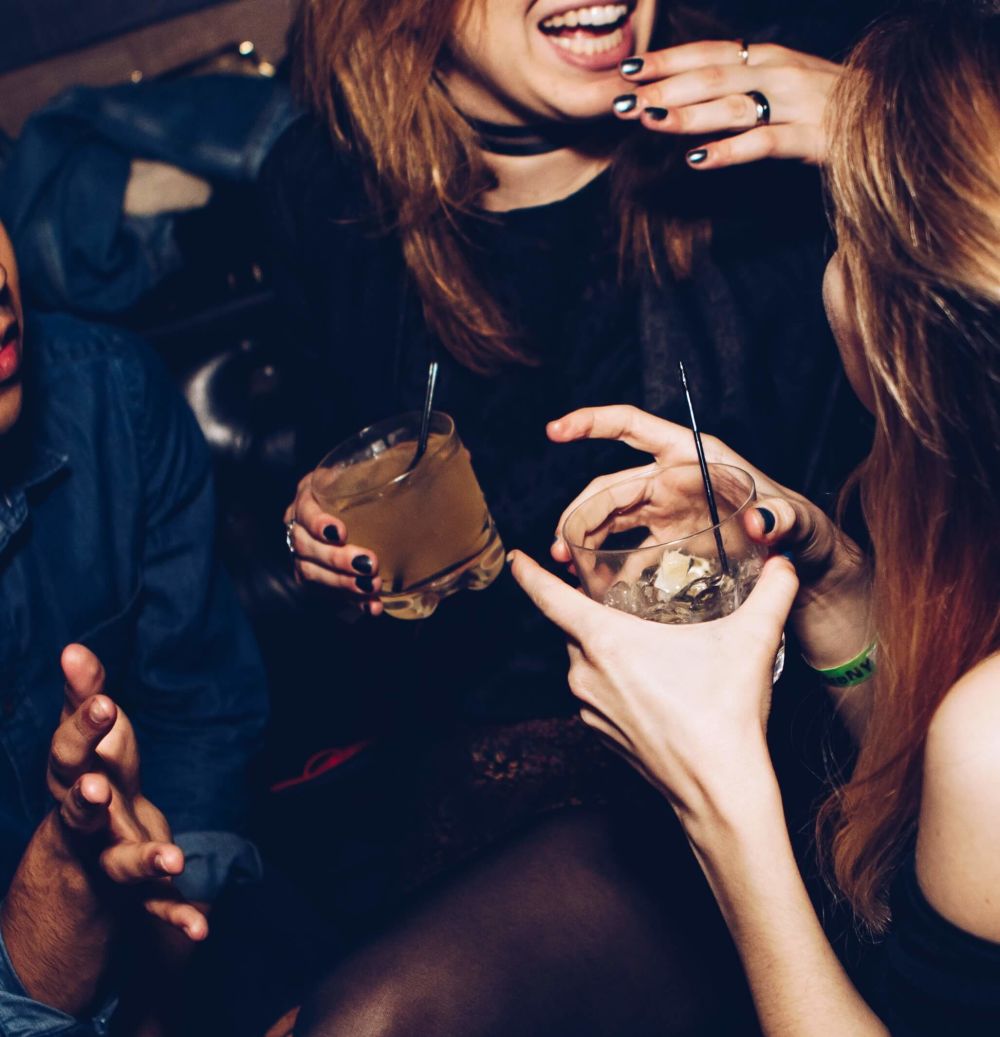 Strike the right chord with your Tandem partner!

Here at Tandem, we always strive to motivate our community to learn any language, anywhere. Following the success of our football Fanzone last summer, Tandem is rolling out a new dedicated feature to get our members talking about the world’s biggest song contest. Because music really does make the world go round!

Due to launch early May, this Eurovision feature brings together fans of the song contest and helps our members to get the conversation started with new Tandem partners! You can also show support for your favorite act and check which country stands at the top of the leaderboard on the “Standings” tab. A little friendly competition never hurt nobody! 😉

So even if you are not a party goer, you can still share some giggles, memories and speak the language you’re learning with your Tandem partner! Expand your horizons and join the language community where millions of people help each other to learn languages.